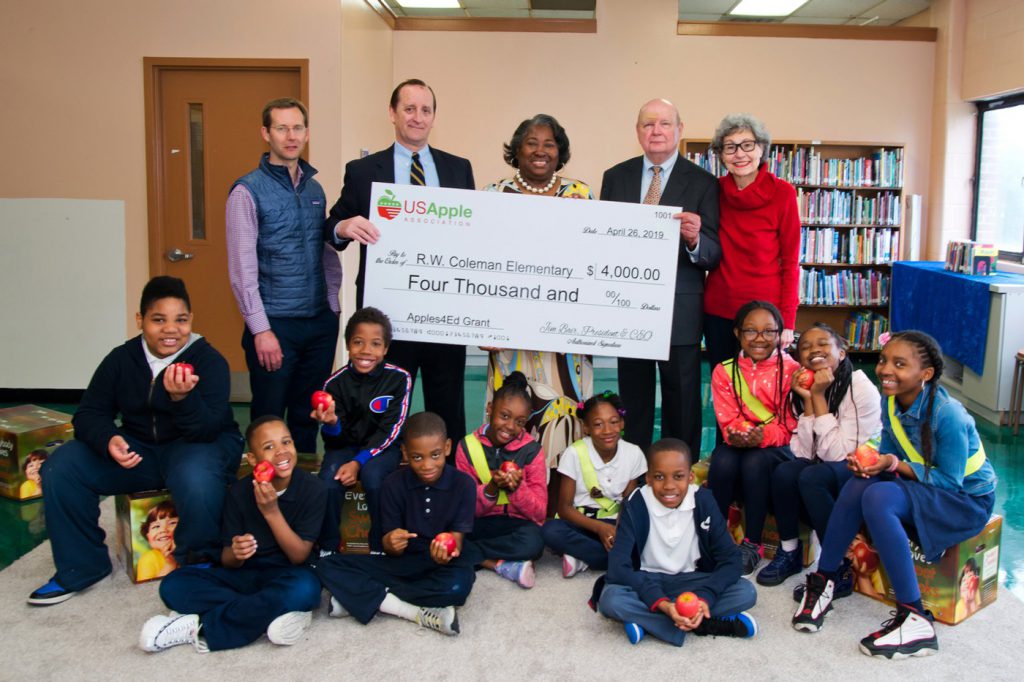 “Receiving numerous applications from across the country, Robert W. Coleman Elementary really stood out because of its critical need to provide students with healthy, substantive food they otherwise might not receive,” said USApple President and CEO Jim Bair, who presented the award to the school. “We believe that having access to nutritious foods is a fundamental element to a student’s success in learning.”

Nearly 3,000 students in Baltimore are homeless, which means they may get free meals at school during the weekdays, but on the weekends they are likely to go without. Through Heart’s Place Services, Inc., a charitable organization created to assist the area’s homeless population, ‘Weekend Survival Backpacks’ are given to homeless students at the end of each week to feed a family of three. Robert W. Coleman Elementary is one of 11 elementary schools in Baltimore that participates in the program.

“Our goal is to feed as many children as possible, who otherwise would not be fed,” said Christian Wilson, Executive Director of Heart’s Place Services. “The numbers of schools that we serve constantly grow in order to meet the demands of those who are homeless.”

Robert W. Coleman was one of five grant recipients under the 2019 Apples4Ed program. The remaining schools will be publicly recognized throughout April and May. Applications for 2020 Apples4Ed funding will open in August.

Apples4Ed is a program created by USApple, in partnership with the School Nutrition Association and the National Association of State Departments of Agriculture, to financially award schools that encourage daily consumption of healthy, balanced foods that positively impact student achievement, focus and fitness. To learn more, visit apples4ed.com.

U.S. Apple Association is the national trade association representing all segments of the apple industry. Members include 40 state and regional associations representing the 7,500 apple growers throughout the country, as well as more than 400 individual firms involved in the apple business.

Dan Rodricks: A backpack of joy for homeless children